A reminder to support the pursuits of your local wandering artists. Oft quoted, “Not all who wander are lost…” {but some of us are, intentionally}.

Ergo: Not running away from something but strolling towards something, maybe noted upon finding. Maybe not. Wander on, document, create, share. Good shoes are a bonus, but don’t let them fool you into stopping. Beware imposters, the self-proclaimed et al. #drifton

Looking for a Direction 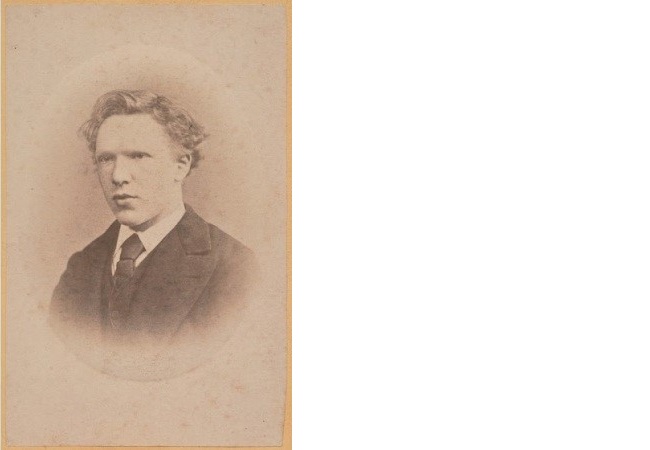 Vincent at the age of nineteen

Schoolboy, junior clerk at an art firm, teacher, bookseller, student and preacher: Vincent van Gogh was all of these before he decided at the age of 27 to become an artist. That decision would change the history of art forever.

‘I heard from Pa that you’ve already been sending me money without my knowing it, and in doing so are effectively helping me to get along. For this accept my heartfelt thanks.’

The myths about Vincent van Gogh and his ear incident vary widely and no doubt are all untrue. As such, I crawled into the heart of the legendary artist to learn his true motivations on that night in Arles, France with his blustering painter pal Paul Gauguin.

The results are held secret amongst the Black velvet painting clad walls of the Waldorf Hotel.

While I am no Daniel Day Lewis, I do go “method” when needed… Specifically, when absinthe-spiked hot toddys are needed to crawl into hearts of darkness to discover the lust for life of Vincent van Gogh. The eyes hold all the secrets.

Some photos by Jeffrey, Phillip (i think) others by… ?

END_OF_DOCUMENT_TOKEN_TO_BE_REPLACED

Transcription of a talk called “Art and Tech are Old Pal” at Wordcamp Vancouver in 2010. Video no longer exists (thanks to blip.tv) but audio exists, as does a “round-up” of photos, tweets, artifacts, and so on. See “Consider Perusing” below.

Dave: I bet you’ve had a lot of knowledge today, so you’re probably pretty exhausted.  I’m pretty wiped out but that’s mostly from the speaker’s dinner last night.  Thanks to the organizers for bludgeoning us the night before.  I really went there.  This will be fine.  I’m just going to pop in for just an hour or so.  It turned out to be longest bus ride of my life on the way home.  Overall, we’re good.  So, Mr. John Biehler on keyboard. [applause]

So, I do my best thinking in the bath because you can’t do anything else.  When you’re in the bath, there’s really nothing else you can do.  You certainly can’t use your iPhone unless you put it in a little Ziploc bag.  You shouldn’t be using your laptop.  That’s just dangerous.  I can’t use my vaporizer because I’d be electrocuted.  So really, all that’s left to do in the bath is thinking.

Recently, I was in the hospital.  Hit me the slide there, John.  While I was recovering and having my scrambled eggs and stuff like that, I got to thinking about what a strange conundrum.  What a strange piece of place of history that we live in with this tool.  I was thinking about coming to talk to you guys.  I had to have something because I really couldn’t think about it because I really couldn’t do much of anything.

I started thinking about how weird it is that all of a sudden art and technology were seeing these fruitions of time where all of a sudden a lot of you are making tools, writing codes, I went and sat in some of the things, and John’s talking about Map and all the new innovations of WordPress 3.0., I use the free WordPress.com, so I’m just letting you guys figured out how to build the tools.

But, all of a sudden, we’re replacing time that guys are making tools.  You’re also expected or in some way producing content for these things.  All of a sudden, you have this new publishing platform in front of you.  I started thinking, because I’ve always been caught in space between art and technology as evidenced here with my King Tut exhibit there, that was pretty good and that’s the important part of taking risks, just proof and point about when you make art, you got to take some risks.

END_OF_DOCUMENT_TOKEN_TO_BE_REPLACED

What follows is transcription of a talk called “Fck Stats, Make Art” at Northern Voice, 2008 in Vancouver, BC. Original audio (record by Jay Stewart who is identified as Speaker 1 below) exists, as does a “round-up” of photos, tweets, artifacts, and so on. See “Consider Perusing” below.

Speaker 1: We’re at Northern Voice 2008 in Vancouver BC at the University of British Columbia Forestry Science Center and I’m about to record Dave O’s presentation.  What is the name of the presentation?

Speaker 1: Fuck Stats Make Art.  It’s going to be a little bit controversial because he’s going to give a call to up the ante on quality of stuff people are posting.  He’s like, “It doesn’t matter if people are looking, it matters if it’s good content, that’s more important.”

Speaker 1: I don’t need to know when people’s cats are going to the bathroom.  I see a lot of that on Twitter and other sites and stuff, you know?

Announcer: So, it’s my pleasure to introduce one of my best friends here Dave Olson.  He also works with me at Raincity Studios and I’m really excited that you guys get to hear him talk today.  I think this talk would be quite a bit different from everything else that you hear at Northern Voice.

I dragged, Dave, kicking and screaming in the world of Google Analytics and I just didn’t get it, just like every moment I spent either looking at my viewers or attracting new ones is one less moment I’m writing or doing something else that I love.  So, I always respected that about him.

He’s a poet, a filmmaker, an author, photographer and many other awesome things.  Anyway, I’ll leave it up to him to go with the rest.  So, welcome to Fuck Stats Make Art.

END_OF_DOCUMENT_TOKEN_TO_BE_REPLACED

What follow is a transcription of a talk called “Are You Worthy – Publishing from Greeks to Geeks” at Wordcamp Whistler in 2009. Video and audio exists, as does a “round-up” of photos, tweets, artifacts, and so on. See “Consider Perusing” below.

Speaker: We really hoped you enjoyed today and I think you’re going to enjoy this last session.  I’ve been looking forward to it since we started planning this.  So with that I’m going to turn over to Dave Olson, he’s going to ask you, “Are you Worthy?”

Dave: So, it’s the end of the day, my brain is a little stretched — a lot of input, a lot of stuff.  So, if you feel a little antsy, because frankly taking notes — I don’t know if I’m going to say anything that’s really worth taking notes.

My ulterior motive for asking you to do that is that I didn’t bring anything to put on the projector.  But I have lots of little odds and ends here.  So, you’ll get a better view if you come and sit up front.  That’s the way I like it — special shout-out to the ladies right back there.

I almost said I didn’t make any slides but I did make two slides here because people are always telling me that, “Dave, we really like your presentations, but damn it, would you give us a bulleted list?”

END_OF_DOCUMENT_TOKEN_TO_BE_REPLACED

I am an aficionado of art in general but for me, the most scintillating and infectious era of painting spanned roughly from the ending of the impressionists to the start of the abstractionists – Van Gogh to Picasso in brief – in there are Matisse, Vlaminck, Toulouse-Latrec, Chagall …

I also follow along as various Van Gogh and Munch’s are stolen and sometimes recovered and meditate (for lack of a better word to describe deep, lucid thoughts occurring while walking and not-thinking) on the reasons and logistics for art thievery and the conundrums and tensions between art and commerce in general.

Anyhow, A few weeks back, a story of quadrillionaire impresario Steve Wynn excitedly put his elbow through Picasso (and received tons of really favorable press from it – he’s clumsy and an art enthusiast the articles say). He had to cancel a sky-high deal to sell the piece and sent it into repairs.

Meanwhile, another Picasso (one I particularly like too) is accused of being obtained under devious and dubious surroundings – indeed diaspora results in art and objects d’art to be left behind, sold at a discount rate, hidden never to be found or otherwise experience an unplanned change of hands.

How to present a case? Is one really entitled to damages from a third-party (meaning someone who did not “steal” the painting but may have purchased it off someone who did obtain it in tense circumstances)? Should The Louvre, for example, return Hammurabi’s code? But to whom?

Egypt’s ancient and rich legacy is another example of a museum taking, but ultimately preserving, objects that otherwise would’ve been scavenged by bandits and melted and sold. The Haida art local to the Northwest might have been lost with many of the tribe (small pox etc) had the somewhat(un)-scrupulous sea captains not taken precious artifacts to London for cataloging and preservation – later to help revive the art for contemporary artisans.

In the case below, the factoid missing from the briefing is how the wealthy banker obtained the painting in the firstplace. There may well be a chain of devious behavior but either way, i’d prefer the piece to end up in Pablo’s fine museum in Barcelona which, while full of fascinating pieces showing his progress as an artist, lacks some “major” pieces from what is perhaps his most enduring era of his craft.

NEW YORK(AP) — British composer Andrew Lloyd Webber’s Art Foundation withdrew a Picasso painting worth up to $60 million from a planned Christie’s auction Wednesday amid claims by a German man that he owns the piece.

TheLloyd Webber foundation and Christie’s said ownership claims by Julius Schoeps meant a “cloud of doubt has been recklessly placed” on the ownership of the painting from Picasso’s Blue Period, “Portrait of Angel Fernandez de Soto.”

Schoeps is suing the Lloyd Webber foundation, saying in a federal complaint that he was an heir of wealthy Jewish banker Paul von Mendelssohn-Bartholdy from Berlin and that the banker lost the painting in Nazi Germany in a “forced sale.”

Source: Van Gogh, Monet, Picasso (and others) in Seattle | OlyBlog

My buddy Cosmo – and knowing that i am an enthusiast of Vincent Van Gogh and modern-ish art in general – passed along an Olympian article (now that i live in North Vancouver, i thankfully don’t read it much ;-)) about a exhibition in Seattle put on by the friendly billionaire Paul Allen.

In short, the exhibition will juxtapose works of art from different eras in an attempt to emphasize the similarities of concept or intent despite the apparent differeces in medium or technique (i.e. Monet next to Jimi Hendrix). In other words, art is art is art unless it is not art.

Here’s the roster (BTW, I am totally gonna see this stuff and try to resist my art thief impulses).

More about The DoubleTake: From Monet to Lichtenstein via Seattle PI.

PS Perfection is not the aim, simply best efforts and sincerity, however do lend a hand and advise about duplicates, sloppiness etc at Errors and Omissions